Samuel was born in 1892, at Claylands in Worksop, the eldest of the three children of Samuel Sikes Berry and Lucy (née Styring).  He had two younger siblings: Kathleen (born 1895) and Thomas (born 1889).

The 1901 census shows the Berry family at Bothamsall, East Retford, Nottinghamshire with Samuel senior’s occupation given as ‘farmer’.  He was educated at Harrogate Grammar School.

By 1911, Samuel Hoyland had moved to Long Bennington and was working on the farm of Walter Bingham as a pupil.

Private 2851 Samuel Berry enlisted with the Yorkshire Dragoons (Queen’s Own), a Territorial Regiment, during 1915 and was posted to France in August of that year.  He was promoted to Corporal, and then to Sergeant.  He received a new service number, 175249, when the Territorial Forces were renumbered early in 1917.

In April of 1917 Samuel gained a temporary commission with the 4th Railway Service Detachment, part of the Army Service Corps.  2nd Lieutenant Berry’s responsibilities would have included unloading the division's supplies at a railhead and passing them to the Divisional Supply Column to take forward by road or trains from the base ports.

Later in the war, Samuel was promoted to Lieutenant and his unit of the Railway Service Detachment became part of the Machine Gun Corps.  He served with this unit for the remainder of the war.

After the war, Samuel was recorded on the Electoral Register as living at Ellis Laithe Farm, Havercroft, Wakefield, Yorkshire with his parents.  In 1923 he returned to the East Midlands, marrying Hilda Wood (née Blythe), a widow, in Bottesford, 1923.  He lived in Normanton, Bottesford until 1926 before moving back to Main Road in Long Bennington, probably to Peacock Farm.

In February 1936 Samuel was killed following a riding accident whilst out with the Belvoir Hunt.  His horse reared and fell over on top of him.  Samuel was seriously injured and died in Grantham Hospital. 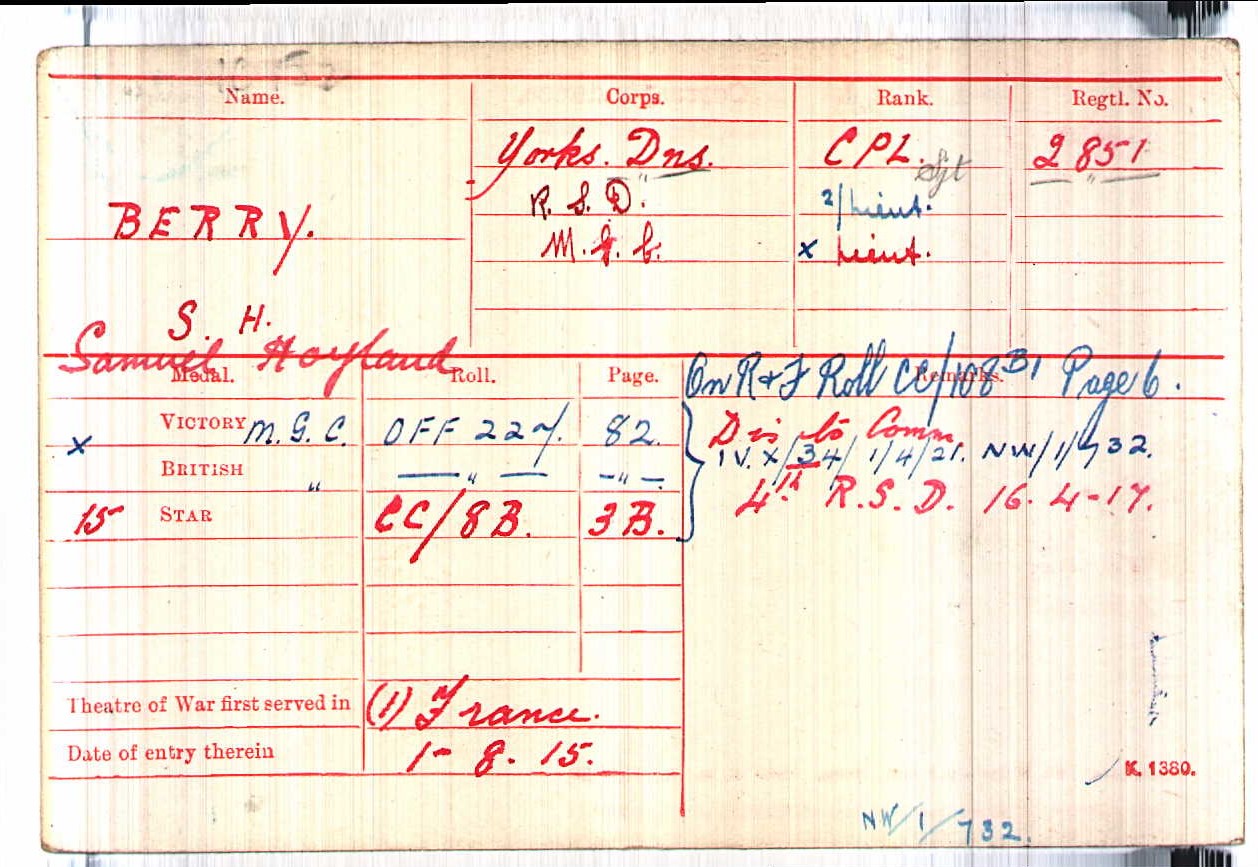