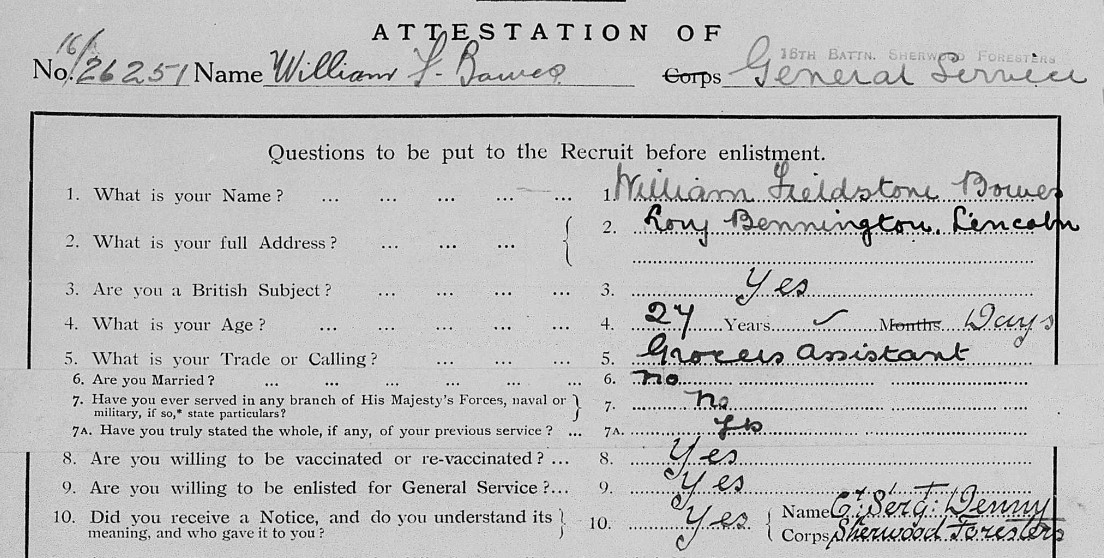 William was born in May 1888, in Long Bennington, the third of the three children of Thomas Waugh and Ann (née Metcalfe).  His siblings were: Violet (born 1882) and Aaron Waugh (born 1884).

William’s father, Thomas Bowes, was a tailor and by 1888 was living with his family in Long Bennington.  In 1891 the family were living on Wheatsheaf Lane.  The 1901 census shows the Bowes family at Main Road, Long Bennington.

In 1911 Waugh and his family were living on Main Road, Long Bennington with William working as an assistant grocer.

William enlisted in May of 1915 and the following day was posted the 16th Battalion of the Sherwood Foresters (Notts and Derby) Regiment, becoming Private 26251.

In March 1916, William was posted to France and served there until February 1917 when he was struck down with influenza.  Initially admitted to Number 10 Casualty Clearing Station at Remy Siding which was just outside Poperinghe and is now the site of the Lijssenthoek Military Cemetery in Belgium.  His condition was apparently very severe as two days later he was admitted to the Number 2 General Hospital at Le Hâvre and the following month was shipped back to England on Hospital Ship Elizabeth.

In July 1916, after his recovery from the ‘flu, he was transferred to 4th Battalion Sherwood Foresters which was a Reserve Battalion based in Sunderland.

In August 1917, while back in the UK, William married Elsie Dodsworth in Southwell.  William and Elsie did not have very long together before William was fit enough to return to the Front Line.  In September 1917 he rejoined the 16th Battalion in France being appointed Lance Corporal (unpaid) in October and then promoted to the paid post in December of the same year.

On 21st March 1918, William was wounded in action receiving a gunshot to his forearm; he was taken to Number 34 Casualty Clearing Station at Marchelpot (east of Amiens, about half way between Amiens and St Quentin) and from there was moved to Number 16 General Hospital at Le Tréport.  He was returned to the UK in April 1918 on Hospital Ship Denis.

His wound was a serious one, William’s ulna being fractured.  William was transferred to the Edinburgh War Hospital in April 1918 remained in hospital until December 1919.  His treatment included a bone graft in March 1919 and the later removal of a damaged section of bone in November 1919.  His arm would have been left permanently damaged with limited flexibility in his fingers.

In January of 1920, William was discharged from the army, being no longer physically fit for army service.  William’s army service earned him the British War Medal and the Victory Medal. He was also awarded a war pension because his injury was deemed to have caused a 30% disability.

Once he left the army, William moved back to Easthorpe, Southwell.  Children were born to William and Elsie over the following years: Barbara was born in 1920, Basil in 1922, Jean in 1924 and Derek in 1932.

The 1939 Register shows William and his family still in Easthorpe with William working again as a grocer’s assistant.