Thomas was born December 189, in Long Bennington, and was baptised on 26th July 1895, the third child of Thomas Baggaley of Long Bennington and Margaret O’Neill (born in County Waterford, Ireland).  Thomas, senior, and Margaret married in Brisbane, Queensland, Australia in 1888.

The 1901 census shows the Baggaley family living on Fen House in Long Bennington, and in the 1911 census their address was given as Fen Farm, Long Bennington and by that date Thomas is working on his father’s farm.

Thomas enlisted with the South Nottinghamshire Hussars (a Yeomanry Regiment) towards the end of 1914, probably in November - Private 1613 of the 1/1st Battalion.  The Battalion sailed from Avonmouth to Egypt in April 1915 and Thomas entered the Egyptian theatre of war in September 1915.

The 1/1st Battalion of the South Notts Hussars fought in both Egypt and Gallipoli.  On 3rd April 1918 the Hussars Battalion were converted into B Battalion of the Machine Gun Corps, where Thomas was given a new Service Number, becoming Private 164386.

On 26th May 1918, the Battalion embarked from Alexandria on HMS Leasowe Castle, bound for Marseilles, France.  The following day, the ship was struck by a torpedo from the German submarine UB51, and many troops were lost.  HMS Sloop Lily rescued many soldiers and took them back to Alexandria.  On 17th June, the Battalion again left for Étaples, France, this time on HMT Caledonia.  They arrived in France just before the end of the month.

On 19th August 1918, B Battalion was renamed 100th (Warwickshire and South Nottinghamshire Yeomanry) Battalion, Machine Gun Corps.  For remainder of the war they served in France and were involved in the second Battle of the Somme.

In October 1918, the Weekly War List reports that Thomas was wounded, and was then entitled to wear a wound stripe on his uniform, but no further detail is available. He was demobilised on 15th March 1919 and awarded the Victory Medal, the British War Medal and the 1914-15 Star.

Early in 1925, Thomas married Beatrice Taylor in Bottesford and their eldest son Edward was born later the same year.  A daughter, Jillian, was born in 1932.

The 1939 Register shows Thomas and Beatrice living in the village of Hoby, just outside Melton Mowbray.  He died at age of 76 in 1971 in Bottesford. 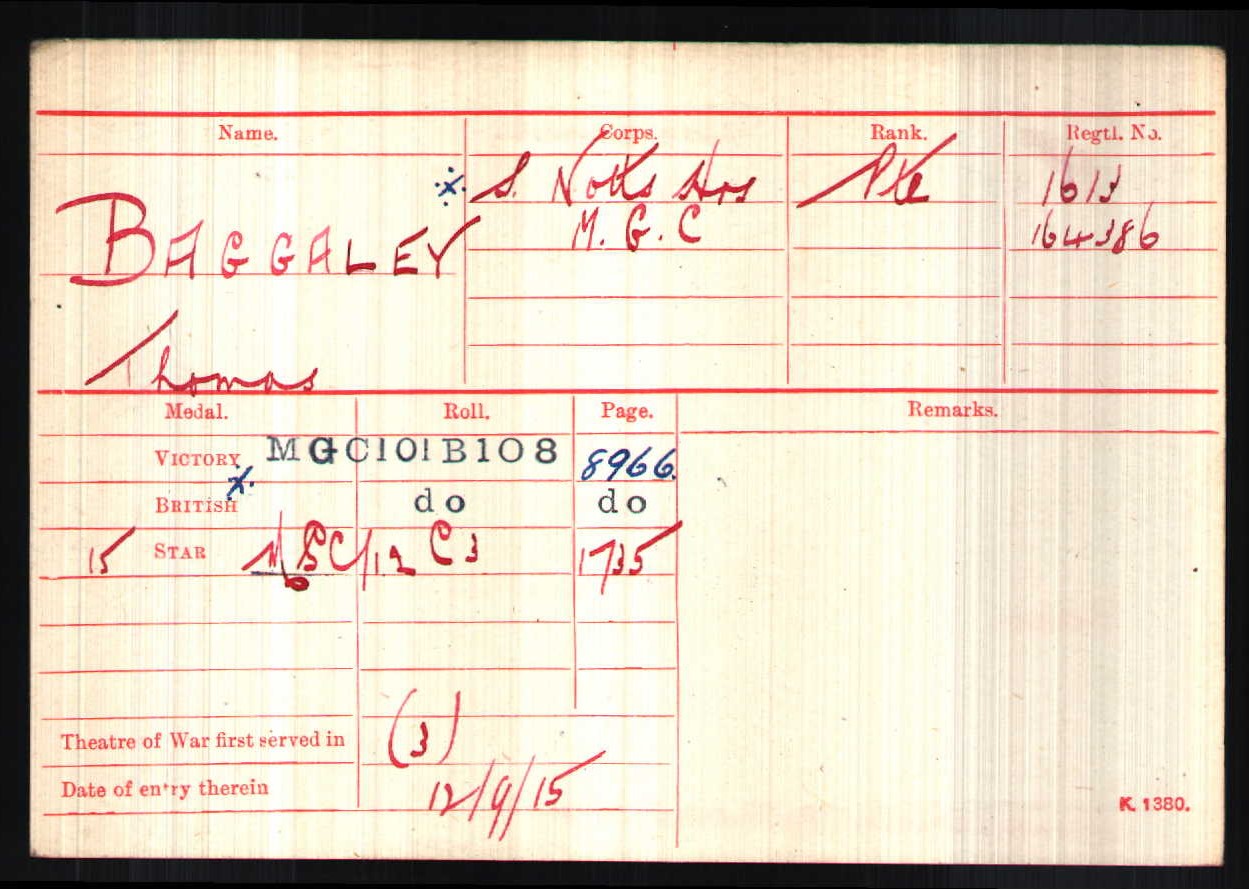